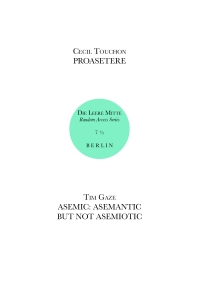 The Cecil Touchon Asemic Reader stands as some sort of data storage device, capable of hosting and properly displaying a variety of solid textual environments and set on discovering the way language naturally tends to abstraction and contradiction, the two together being its generative seeding. Openly challenging and overstepping the saturated mass media input-output system of consumption and production, Touchon seems to offer a thorough list of implicit instructions and poetical how-tos to conceptually work around the snare of an old, yet unanswered aporia: is text the obverse or reverse of an image? Is it true the opposite? “This side of card is for address” – an envelope reads, but the address points to nowhere on Earth, for to make reality real again, it must first be disavowed. Touchon’s creative logic works within these interstices of language to breach the borders and extend investigation beyond naïve interpretations of common goings-on and far beyond pure linguistics, though reality is the realm of language. The reader is thus a tool, a recipient and a sender at the same time, always involved in the process that makes the whole device work.
The very first page sets a purely asemic routine, which the subsequent works put into play. Ripped finds from old poetry books and journals, stamped envelopes and scores, all have become the bedrock the asemic practice erodes. Though a strict protocol cannot be established, other than the blue fingerprint at the right bottom corner of the first few pages, a rather recognizable rhythm of dots, lines and arrows pointing right, drives to the subsequent bloc of writings, opening with a carefully erased text. Few residual elements surface: “[…] the […] it […] )”. The pages that follow are crammed with broader and broader gaps as to suggest the presence of something intrinsically meaningful to be rooted out, as if they were semantically sampled by some mobile pointer. Erasure marks slowly turn into asemic fringes and gratings diffracting textual elements. See-through words and other identifiers resemble particles and micro-structures from within the living membrane of textual reality. The reader accesses new signification through this warped perspective of language which, in turn, extends the realm of creation.
In the last sections, the space of writing and the act of writing both undergo shifts, contractions and morphisms that push the original typographic structures of single words, sentences or of whole bulks of text to a critical point. This scathing montage actually attains poetic accumulation by way of endless deletions and duplications. The fragmented word-form connections tend to evoke the notion of space-text itself as a zone of progressive stratification and superposition. This multilayered technique subsumes as many layers of interpretations, as many spaces of truth. Language is not an immobile concept, but what lies below a word if not another word to disarm or erase?